Beatrice and Virgil: A Novel 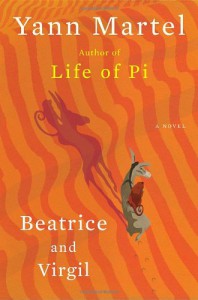 Before buying this book, I was intrigued by the many angry reviews claiming that Beatrice And Virgil was offensive and "tricked" the reader. I couldn't disagree more with those opinions.
There is nothing offensive in this book - there are some dark and disturbing scenes, but offensive? No, not unless many other supposedly "classic" novels throughout history covering man's darkest deeds are offensive too.
And trickery? While the reveal at the end of the book is very sudden, the author and main protagonist hint many times during the story that all is not as it seems, many times openly voicing questions about the undercurrents of the story involving Virgil, a howler monkey, and Beatrice, a donkey.
Beatrice & Virgil begins with a successful author, named Henry who coincidentally? has written a successful novel with animals as the characters. His next novel is rejected by his publishers and he takes a break from writing to reassess things. He receives a letter from a reader asking for help, along with highlighted passages from a story by Flaubert, and a scene from a play he assumes is written by the sender of the letter. Realising the address was not far from his, he decides to write back and hand deliver the letter to the reader's postbox.
When he arrives to deliver the letter he discovers the address is a taxidermy shop and he enters and ends up meeting the man who had written to him.
The taxidermist says he has spent his life writing a play and needs Henry's help with some problems he has finishing it. The taxidermist is a very odd and cold man but has written a play in which the two main characters, Beatrice & Virgil, are animals living on a shirt. Yes, a shirt. In contrast to the taxidermist's cold demeanour, Beatrice and Virgil engage in heartfelt conversations about events they can only bring themselves to call "the horrors".
Over the course of the novel, the taxidermist reads extracts of his play to Henry, who has trouble matching the author's gruff and cold aloofness to the animated and passionate animals in the story. Henry visits the taxidermist several times, trying to understand what his play is about and what message the taxidermist is trying to express with his story, all the while unable to put his finger on the dark undercurrents in the story.
At the final meeting of Henry and the taxidermist, the truth behind the story is revealed, and quite suddenly and shockingly. In fact, the entire story twists within just one sentence. With this, the story continues on very briefly, coming to an end, which while macabre, deeply sobering and dark, is far more satisfying than the ending of Martel's previous book, "Life of Pi".
For me, the mark of a great book is that you are still mulling it over in the days after you finish it, and that has been the case for me after finishing Beatrice & Virgil.